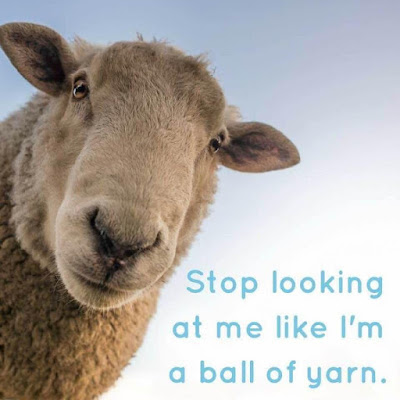 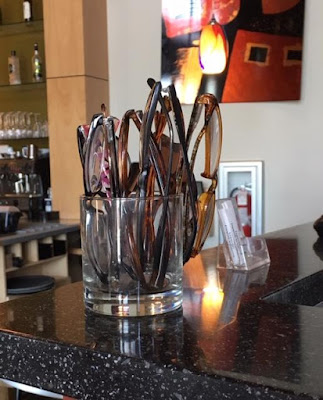 a glass full of reading glasses Loveland, CO May 2019 The first thing I noticed in the restaurant was the glass full of "cheaters" at the register. I asked the hostess if they had been left by patrons, and she said, "Yes." However, no one has inquired about retrieving the reading glasses they've left behind. The cheaters are often loaned to customers who have difficulty reading the menu.
7 comments
Read more 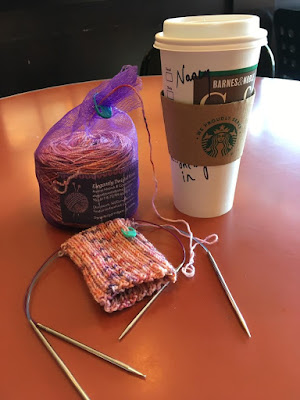 sipping and knitting May 2019 Last week, a friend asked me to accompany her on a road trip. While she was at her appointment, I started a pair of socks and sipped on a cup of Earl Grey. Several people stopped at my table to inquire what I was making. I love how knitting in public is an ice breaker and a conversation starter. The yarn for this pair of socks was given to me by my friend, Julie. She purchased the yarn ( Elegantly Twisted Yarns ) in Nova Scotia. Thanks, Julie!
10 comments
Read more

"Let the Little Children Come to Me" 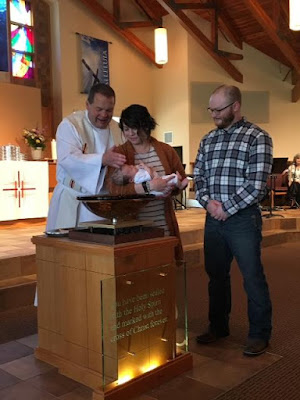 Zeke's Baptism Ft. Collins, CO May 19, 2019 Yesterday, I drove to Ft. Collins for a special occasion: my great-great nephew was baptized. He was born on St. Patrick's Day to my great niece and her husband - their first child, and my sister's first great-grandchild. Friends and family came from three states (Colorado, Nebraska, and Wyoming) to celebrate. I love when families gather for happy occasions. Welcome to God's family, Zeke
14 comments
Read more 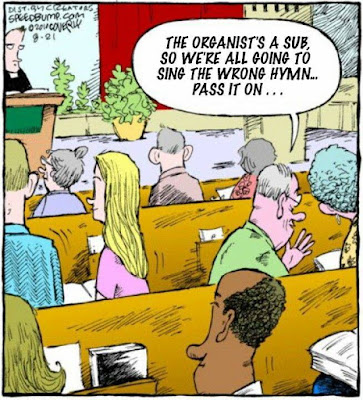 This cartoon brought back memories of the tricks students tried to play on my substitutes.  Over the years, I learned to be very specific in my lesson plans to reduce the shenanigans. Did you or your classmates ever trick a substitute teacher?
10 comments
Read more 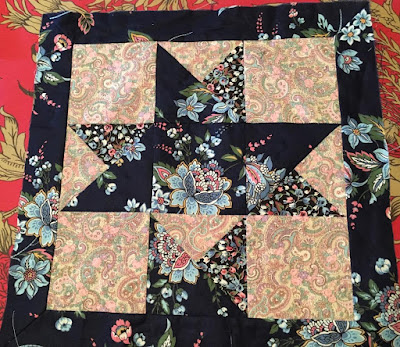 orphan star block May 2019 The baggie of orphan star blocks and fabric that I brought home from Prayers & Squares contained five star blocks sewn together with sashing. It almost looked like the quilter wanted to make a table runner. Another completed star (shown above) was also in the bag, but it had a mitered frame. Do you see a problem with that block? Look at the middle section of the bottom row - do you see that it is upside down? A seam ripper and a bit of stitching quickly transformed the block. Pieces of another star were also in the baggie, but the star was smaller than the other six. Thankfully, the baggie contained some extra strips of the pink paisley fabric, so I framed the smaller star to make it the same size as the other blocks. I sashed the two loose stars and used the extra fabric to create some four-patches and an outside border. Orphan Star Quilt #2 52 x 76 inches The local Prayers & Squares group makes baby - lap size quilts. Since the group u
9 comments
Read more 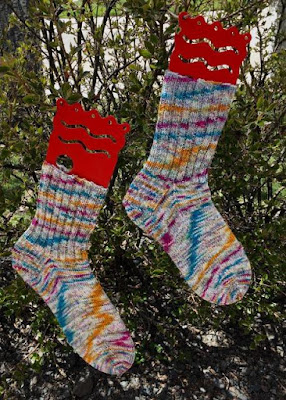 Guacamayo Socks May 2019 Isn't it fun how the yarn striped on this pair of socks. The wind was blowing pretty good when I snapped the photo of the sock blockers hanging on the hedge; thus, the sock on the left looks smaller. I assure you, it is the same size as the sock on the right. Guacamayo image from Google images Yarn specifics are on this earlier post . Gradually, the plants and trees are sprouting leaves, but I've yet to see any blooms.
7 comments
Read more 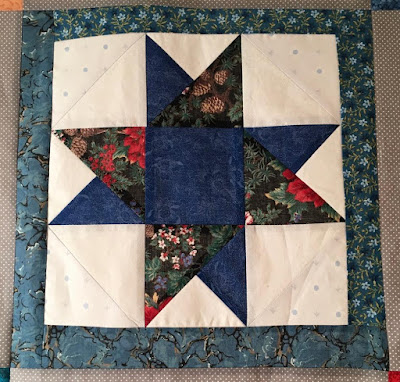 orphan block May 2019 Nearly a month ago, I joined a woman in my apartment complex for lunch, and as we visited, she told me about a local group ( Prayers and Squares ) where she volunteers. The group meets weekly to make quilts for those who are going through difficult times - sickness, grief, personal or natural tragedy, etc. Volunteers begin each session with a devotion and prayer and frequently a local minister will stop by and pray with the group. The ministry is housed in two basement rooms of a local church. Six or seven sewing machines are available as well as a cutting table, pressing station, and a large table for tying. The drawers of the tables are full of fabric squares of all sizes; bins on the shelves contain speciality/themed fabrics, bolts of fabric, spools of thread, orphan blocks and fabric strings. Nearly everything has been donated or was purchased with donated money. Women, who do not feel comfortable sewing, prepare backings for the tops and then tie the
14 comments
Read more 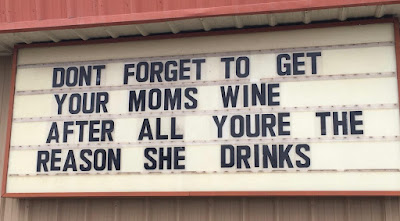 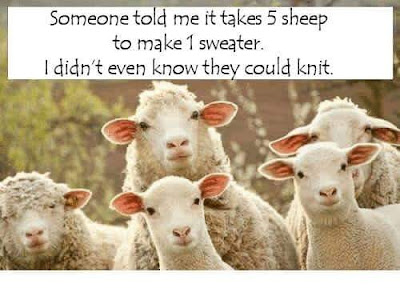 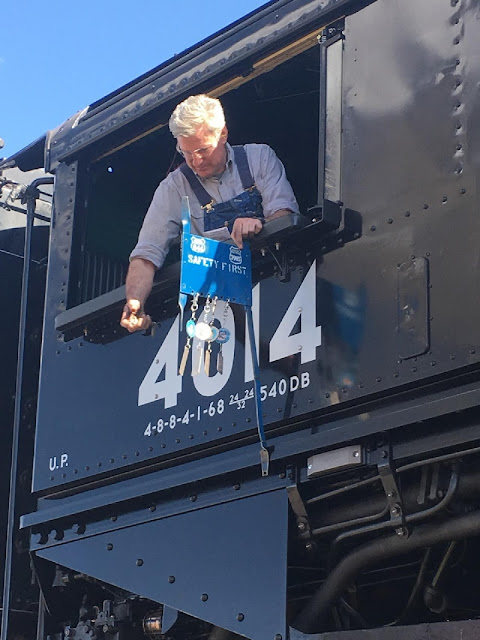 Engineer for Big Boy #4014 Medicine Bow, WY May 4, 2019 Workers on the ground, tossed "fobs" to the engineer, and he clipped them to the blue metal holder. No one seemed to know what these items were. Any ideas? a railroad security guard answers questions from spectators. Four uniformed Railroad Special Agents wandered around the area, and based on my observations, I think there were at least one/two plain clothed agents as well. I believe they were at this stop because it did not have barriers between the spectators and the tracks. I visited with several people as we waited for the train, and some were from Maryland, New York, Missouri, Minnesota, Colorado and northern Wyoming. Many other states were represented, based on the license plates I saw. One couple was staying the night at the historic Virginian Hotel, across the street from the depot. The population of Medicine Bow is not quite 300, and the spectators stopping for the steam locomotives caused
9 comments
Read more 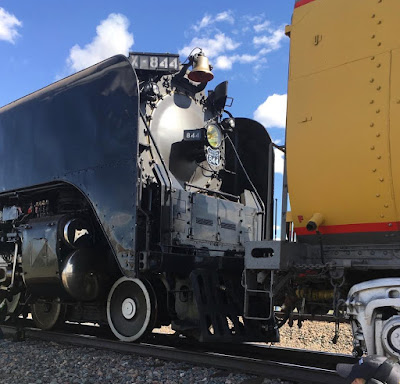 Living Legend Union Pacific steam engine #844 Medicine Bow, WY May 4, 2019 The second steam locomotive on its way to Ogden, UT for the 150th anniversary of the Transcontinental Railroad was engine #844 - the Living Legend . The 844, a Northern class steam locomotive was delivered in 1944 and was used for high-speed passenger service. In 1957, it was used for freight service, and since 1960, it has been used for special service. This engine has never been retired. On Saturday, #844 was attached to about 9 passenger cars and one observation car. I don't think anyone was riding in the cars on Saturday, but I speculate at some time between now and May 17, 2019 it will haul passengers. technicians worked on the Living Legend's massive wheels While stopped in Medicine Bow, the Living Legend received a lot of attention from various railroad workers. Living Legend maintenance maintenance on the Living Legend wheels More train photos tomorrow
5 comments
Read more

Worth the Drive and the Wait 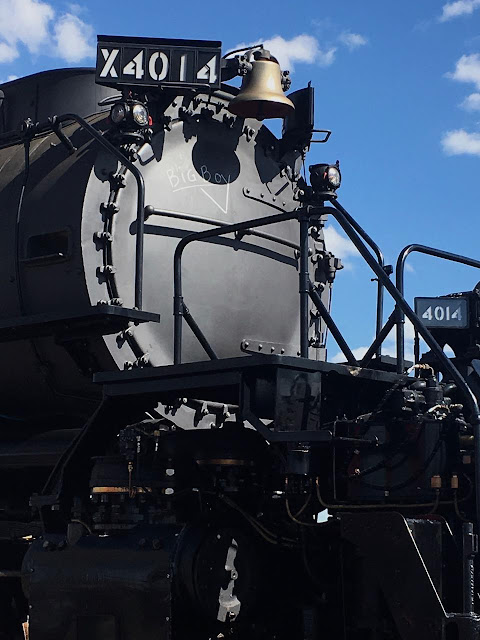 Big Boy Union Pacific steam locomotive 4014 Medicine Bow, Wyoming May 4, 2019 Saturday, two steam locomotives passed through Wyoming on their way to Ogden, UT for 150th anniversary of the competition of the transcontinental railroad. The largest of the two locomotives, #4014 a Big Boy, was the lead engine. It is a massive machine and impressive to see in person. Even though the train was stopping in Laramie, I decided to drive an hour northwest to Medicine Bow, a small town that converted its former depot into a museum. The crowds anticipated in Laramie were huge, and I thought my chances of seeing the locomotives up close were better in Medicine Bow. I was not disappointed. The train was over an hour late in arriving, but it was worth the wait. Big Boy (click image to enlarge) Twenty-five Big Boys were built exclusively for Union Pacific Railroad, and the first was delivered in 1941. The Big Boys were 132 feet long and weighed 1.2 million pound. Because of their grea
10 comments
Read more

Who Writes These Things? 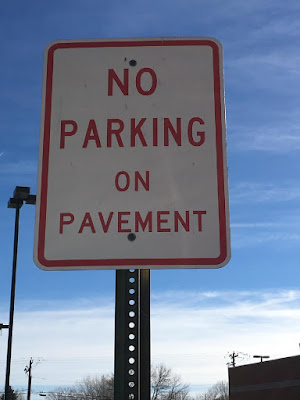 on the corner of Sunset and Federal Riverton, WY 2018 How would you interpret this sign?  Does it mean that parking is not allowed on the street? If drivers can't park on the pavement, is parking allowed on the grass or on the cement? The sign is a bit ambiguous and probably should simply state:            "No Parking"            "No Parking allowed from here to corner." Painting the curb red would certainly be cheaper and more effective than the confusing sign.
10 comments
Read more 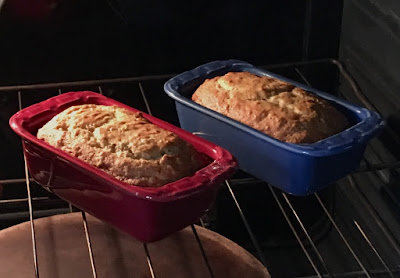 mini loaves of banana bread April 2019 When I found some half-priced bananas in the grocery store over the weekend, I developed a craving for homemade banana bread. It's been ages since I've baked anything from scratch, but I knew I had the necessary ingredients in my pantry. I made two full-sized loaves and three mini loaves. The small loaves are gifts, and the two large loaves are sliced, wrapped, and tucked in the freezer (minus a couple of slices 😉) for future breakfast treats. What item(s) have you recently baked without using a mix?
13 comments
Read more
More posts