Showing posts from February, 2020
Show all 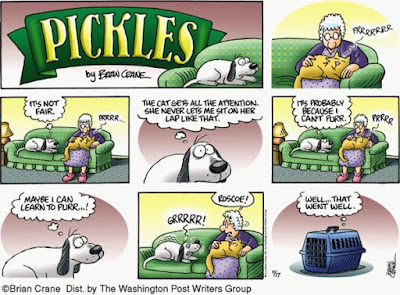 In the Donation Box 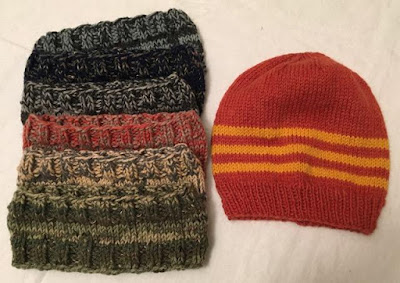 six headbands and one hat for donation February 2020 When I finished the hat I started in January , I decided to knit something faster with the worsted, scrap yarn. The headbands were knit with two strands of yarn and used this simple pattern . The headbands and hat are in the donation box, and all the yarn scraps have been used.
12 comments
Read more 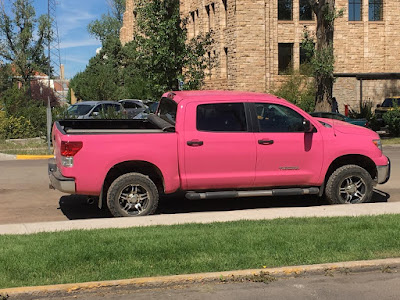 Laramie, Wyoming August 2019 Last summer, I spotted this pickup several times around town. The photo represents the color well - a bright, Pepto-Bismol pink. It brought to mind the pink cars Mary Kay cosmetics awards to their top sales personnel. Would you want a vehicle painted this color?
18 comments
Read more 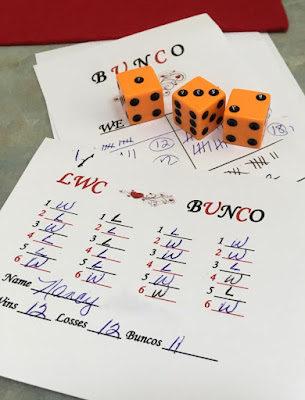 February 2020 Yesterday, I spent the afternoon playing Bunco at the senior center. The annual event was hosted by the Laramie Women's Club, and I'd estimate that 90 ladies spent the afternoon rolling the die, enjoying appetizers, and meeting new people. Lots of door prizes were awarded during the afternoon. As you can see, I won as many rounds as I lost, and scored two buncos. It was a fun afternoon. Have you played Bunco recently?
12 comments
Read more 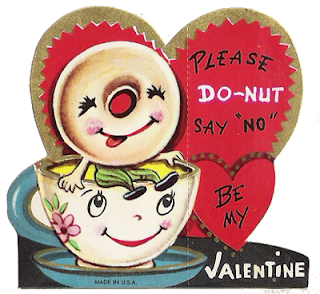 vintage valentine Remember the days when valentines were full of puns? Valentines currently on store shelves seem to feature super heroes and princesses rather than silly puns. I think the silly sayings are the most memorable. A favorite valentine I received in elementary school was handmade from red and white construction paper and looked like the gift tag in the photo below - a woven Scandinavian heart. from Google images Did you ever make valentines to give to your friends?  Did you keep any valentines from your childhood?
14 comments
Read more 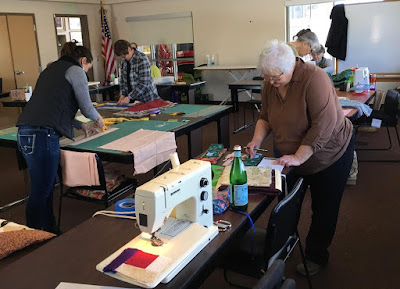 cutting kits and calculating borders February 2020 Friday and Saturday, I joined a group of local quilters to make quilts for the Laramie Hospice Home. Both days, my "job" was to sew borders on some donated quilt tops that did not meet the size requirements. Kathleen calculated and cut the fabric for the borders, and I attached them to the tops. I added borders to seven tops and sewed binding on one side of a finished quilt. sew day for Laramie Hospice Home February 2020 Several women were sewing quilt tops from kits or from supplies that they brought from home. Others were hand-tacking the bindings on two quilts. I believe by the end of the two days, the group had 12 - 15 tops and backings ready for the longarm quilters and two quilts bound and labeled and ready for donation. I gave the group  Comfort Quilt  so it could be quilted and donated to the Laramie Hospice Home. Hospice officials told the group they serve nearly 100 patients each year.
13 comments
Read more 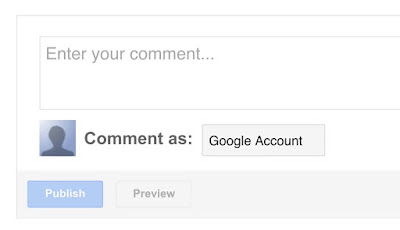 Google comment box to nowhere February 2020 I've been frustrated the last two weeks because I could not comment directly on several blogs that I regularly read. I finally started commenting via email IF I had that person's private email address. Commenting on the posts I read is something I enjoy because the comments connect me directly to the blog author. I've developed some wonderful friendships with other blogger simply by commenting. Recently, the photo above is what I encountered on nearly half of the blogs that I read faithfully every morning. The "Google Account" tab shows that I was not signed in, but in reality, I was. Any comment written in the comment box would not publish even though it disappeared when I hit "Publish." I contacted Blogger about the problem. Honestly, they were not very helpful but suggested that I switch my internet browser to Chrome, which incidentally is a Google product, as is Blogger. Can you say "conflict o
13 comments
Read more 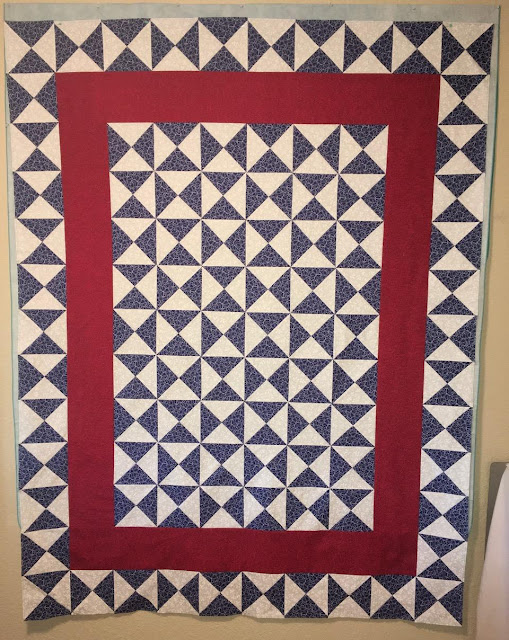 Counting Down 59 x 78inches Quilt of Valor #174 February 2020 Counting Down was constructed as a Quilt of Valor National Sew Day mystery. The mystery QAL consisted of seven sewing clues, released every two hours on Friday evening and all day Saturday. The fabric was cut before the mystery began. It was a fun mystery project that was coordinated by Alycia C. on the Mystery Quilts for the Military online group.
10 comments
Read more 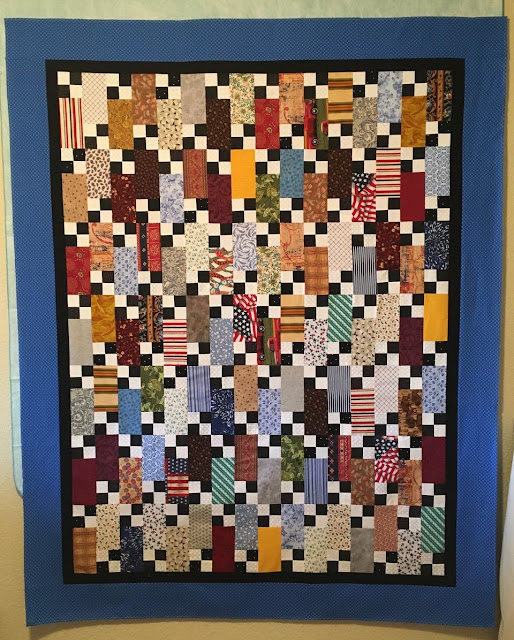 Bricks and Stepping Stones quilt for Laramie Hospice Home 60 x 75 inches January 2020 Bricks and Stepping Stones came together quickly since the "bricks" were already cut. The four patches took the most time to cut and sew.  One of the Laramie quilt guilds is hosting a sew-in to make quilts for the Laramie Hospice Home on February 7 and 8th. I'll deliver this top and its backing to the organizers of the sew-in and stay to sew with them. I made three quilts in January (two QOV and one hospice quilt) and managed to keep my sewing room tidy through the whole month.
14 comments
Read more 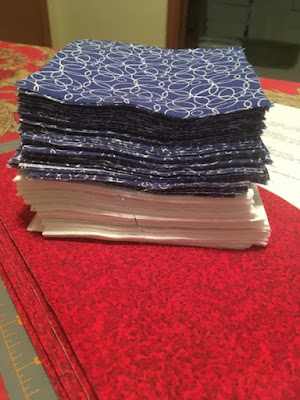 ready for assembly February 2020 I spent part of Friday and nearly all of Saturday working on a QOV Mystery Quilt-a-Long with others across the United States. Three clues were released on Friday, but the majority were released every two hours on Saturday. Most of the quilts I make are scrappy, but since I had some blue and white yardage (thank you Connie), I decided to stick with three fabrics for this mystery. The sewing was manageable in the two hour segments, and I didn't have any problems finishing each step within that time frame. four-patch units sewn facing each other The first two clues were quite simple, creating two-patches and four-patches, but the third clue brought the mystery to a turning point when the doubled four-patches were cut on the diagonal. the double four-patches were cut diagonally Suddenly, things got interesting.  hour glass units  If I hadn't run out of steam, I could have easily completed the mystery on Saturday. Here it
13 comments
Read more 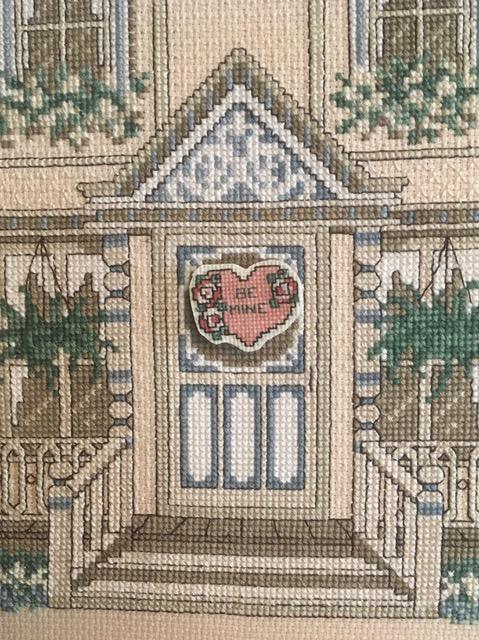