Showing posts from June, 2015
Show all

Back in Time - Grandfather 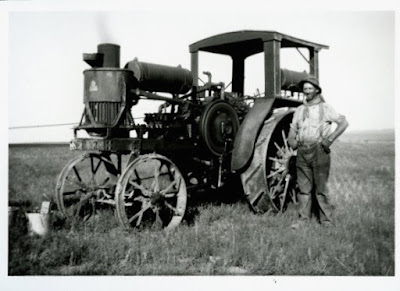 Franklin Stearns near Provo, SD approx. 1922 I didn't know my paternal grandfather, as he died many years before I was born. He was born June 4, 1870 in Almond, New York and died September 4, 1927 in South Dakota. The following narrative is from the Edgemont Centennial 1890 - 1990 book that was compiled by the Edgemont Centennial Book Committee - edited by Caroline Curl and printed 1989 by Edgemont Herald Tribune, Edgemont, SD, pages 413 - 415 (I apologize for the choppy sentence structure, but this was copied verbatim from the book. I added the information in the parentheses.) Frank was a farmer, as were his father and grandfather. Land was expensive and the desire for a farm of his own brought him to South Dakota. In May, 1910 he and his brother-in-law Julian came to South Dakota (from Minnesota) by train. They each filed on homesteads east of Provo. Their families came on the train to Provo on November 1, 1910. Frank met his family with a team and wagon. There were no
9 comments
Read more 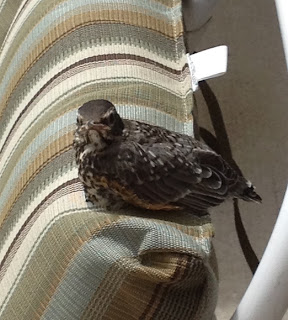 Baby Robin soaking up the sunshine June 2015 Last week, this baby Robin gave me the evil eye when I went out to water my geraniums. It wasn't a surprise to see him/her there because the glider outside my front door has been a popular perch for baby robins in the past. Some of you may remember my photo of the Brothers Grim in 2011 . The baby tolerated my comings and goings but the Mama Robin was making a big fuss on the roof. What surprised me later was seeing (through the window) the actual exchange of food.  The window screen certainly shows up in the photos, but I couldn't resist sharing the images. What did I tell you about talking to strangers! Later in the day, a sibling joined this little one. They stayed for the day and received multiple feedings, but I haven't seen them since; perhaps, they have now learned to fend for themselves.
13 comments
Read more 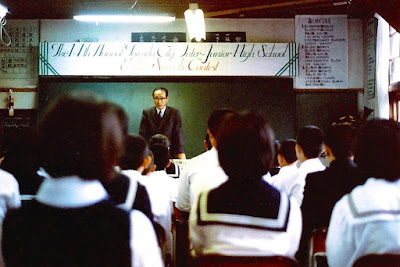 Speech contest Towada City, Japan Fall 1979 The local Japanese school hosted an annual English speech contest where the students recited memorized passages in English to a panel of judges. I was invited to judge the first year that I was in Japan. The contest was an opportunity to see the inside of a Japanese school, and I was delighted to accept the offer. Note the various uniforms the students are wearing, the green chalk board and the posters on the wall. These students attended school six days a week.
5 comments
Read more
By Tired Teacher - June 25, 2015 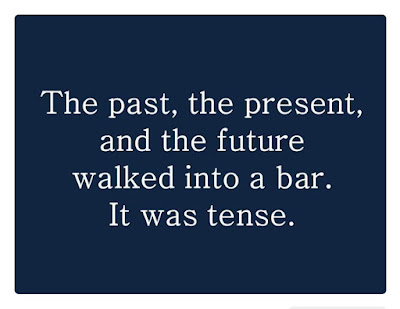 A little chuckle for you today. . .
13 comments
Read more 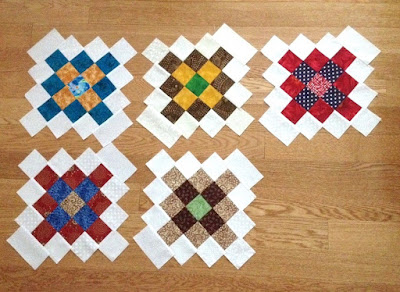 Granny Square blocks In addition to the initial Granny Square block (top middle) I managed to make four more blocks out of the scrap bin. I've been cutting and prepping fabric to make more of these addictive blocks, so the scrap bin should provide enough fabric to make blocks for another Quilt of Valor. For non-quilters, the blocks look shaggy, but they will be trimmed when I am ready to sew them together. The trimmed blocks will have a lot of bias edges that are prone to stretching when handled; thus, to reduce the stretching, the blocks will be trimmed later.
9 comments
Read more 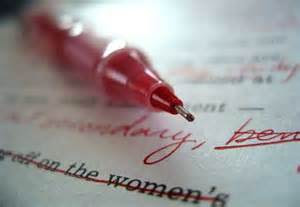 It would be interesting to know how many red pens (also orange and purple)  I used over my 33 year teaching career: I'm sure my former students will tell you that I practically "bled" on their papers. That statement would be somewhat true, but only if they did not spend adequate time proofreading their work. click on cartoon to enlarge This cartoon brings back memories of grading research papers that I would just as soon forget. English (Language Arts) teachers do more than correct spelling: they are the "grammar police," and the correction symbols used on students' papers are something like this: The last two years I was in the classroom, my students spent the first ten minutes of each class working on MUG (M = mechanics, U = usage, and G = grammar) shots. They worked in groups to find and correct errors on writing samples, and I was amazed how much their own papers improved after working on MUG shots for a quarter. My red pen usage dec
13 comments
Read more 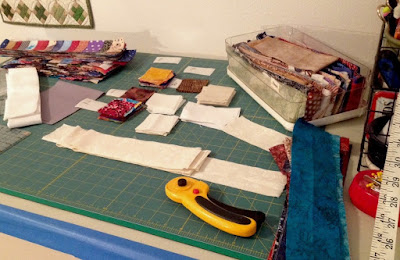 even scrap quilts require a lot of prep work I've been trimming, cutting, and squaring scraps to make the Granny Square blocks , and the scrap piles don't seem to get any smaller. That bin in the upper right is filled with 2.5 inch strips leftover from other projects. The string strips in the upper left are waiting for additional strips to be made before becoming a project. Scrappy quilts require a lot of prep work!
6 comments
Read more 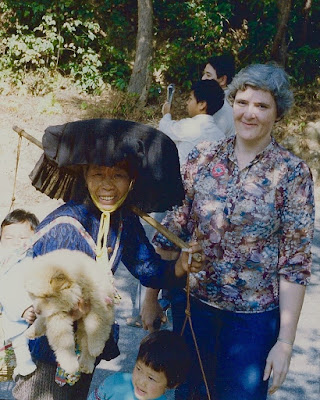 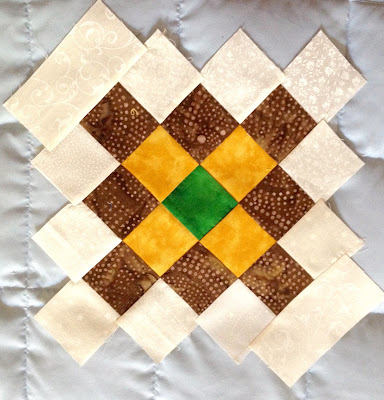 my first Granny Square block June 2015 Before I begin cutting into any new fabric, I MUST bring my scraps under control - again! I've been admiring Lori's Album (granny square) blocks for a long time ( her nearly finished quilt can be seen here ), and when she posted that she was making more blocks , I decided it was time to get some scraps under control, using this block pattern. While the directions that Lori used are no longer available online, I did find this source that shows two techniques (scraps and strips) to make the blocks as well as setting ideas. Lori's blocks have another round of colored squares, and I didn't notice until I had several blocks made. Drat! I've decided to continue making them like the one pictured until I have enough for a quilt. The blocks for the next quilt will have the 16 squares, like Lori's blocks.
9 comments
Read more

Back in Time - Basket Signing 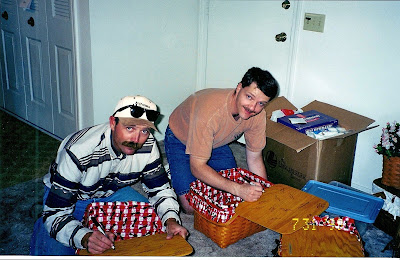 Dwight and Bruce M. July 31, 1999 Before heading to the mountains for a family camping reunion, everyone gathered at my house for the "basket signing." Seven Longaberger picnic baskets were purchased (one for each family), and Marilyn made the cheerful fabric liners out of fabric printed with large ants. Stephanie and Chris M. work their way through the stacks of baskets Everyone signed their name and birth date on the underside of the lid with a permanent marker. Nancy and Evelyn (Sis) A brass plate with 1999 Stearns Reunion was adhered to the top of the lids (directly under Sis' hand). The baskets were not only a memento of the reunion but also a source of some family history. Another posts about the camping trip can be seen here . We gathered for a two family reunion (my sisters married brothers, so it was only logical to gather both sides of the family) in 2006 in Park Rapids, MN - at that gathering, everyone signed fabric blocks for a quilt.
13 comments
Read more 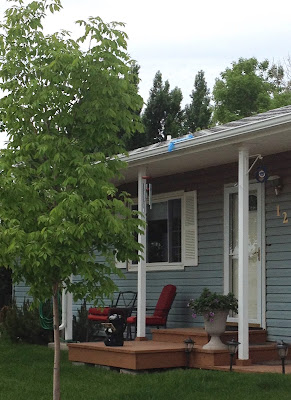 It appears that my neighbor's Riverton Ranger was delivered by drone or by a carrier who needs a bit more training. I subscribed to the Casper Star Tribune (the only published newspaper delivered state-wide) for about 10 years, but I battled with two/three carriers two years ago. The carrier would drive up my short driveway at an angle to toss the paper on the front porch. The only problem was that he/she also drove on my lawn right where one of my underground sprinklers was located. I tried putting up a wire barrier with attached red reflectors, but the carrier just drove into and over the barrier. I tried a heavier barrier (1/2 inch thick metal frame), and it too was bent and broken. Other times, it was like a scavenger hunt to even find the paper. After numerous calls to the regional director, I gave up and just cancelled my subscription: it just wasn't worth the aggravation. Is your paper delivered by a reliable carrier or by drone?
8 comments
Read more 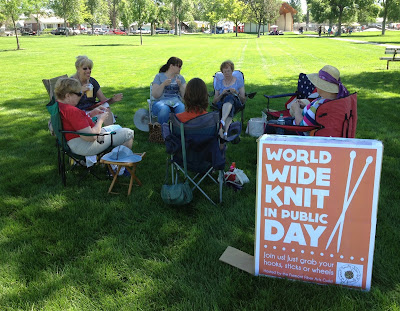 Mary H., Nancy J., Jane W., Jamie D., Colleen J., Christy P. City Park - Riverton, WY June 13, 2015 Members of the Fremont County Fiber Arts Guild held a Knit in Public event on Saturday: it was a gorgeous day to sit and knit with friends. Jamie (back to the camera in the center) made the sign that caught the eye of many passersby. Lion brand posted an interesting article on the importance of knitting in public . Did you plan to Knit in Public this week?
10 comments
Read more 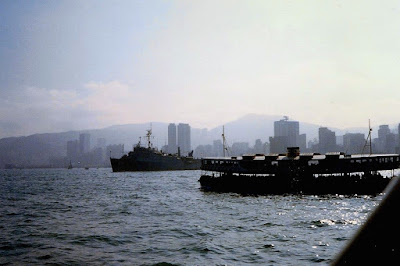 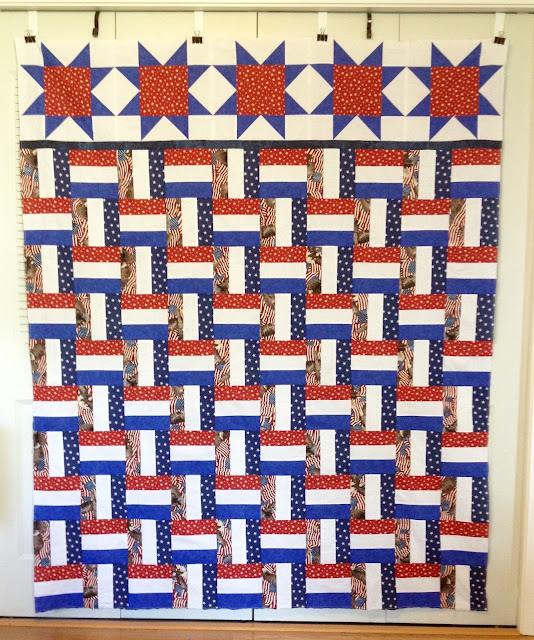 Firecrackers Quilt of Valor 60 x 73 inches Firecrackers  (QOV #66) was created with the help of my QOV elves  in the Lander Sew Sistas. Thank you Mary H., Nancy L., and Brenda H. for your help. Oops Can you spot the problem in this photo? I had to rip and resew a section.
13 comments
Read more 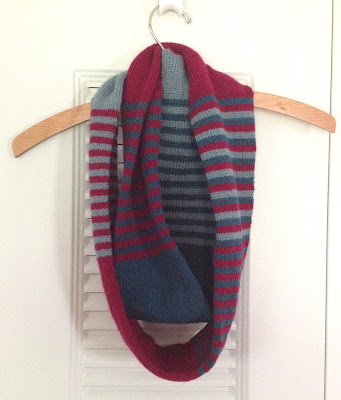 Emma's cowl took me longer than anticipated to knit. I grew weary of the endless stockinette. An earlier post can be seen here . I saw a similar cowl on a Very Pink video , but the pattern was only available with a yarn purchase. Since I have a LOT of sock yarn in my stash, I did not want and need to purchase more. I watched the video multiple times to get the basic idea of the pattern and then improvised. Cast on 60 stitches with a provisional cast on. Knit in a solid color for 8 inches and begin transition into the next color by knitting three rounds of the new color and then three rounds of the first color. I knit 11 stripes of each color and then knit a solid section with the second color. After eight inches of solid, I again transitioned to a third color alternating three rounds of the second and third color until I had 11 stripes of each. I continued in this manner until I had the length that I wanted. The last section I knit contained all three colors
9 comments
Read more 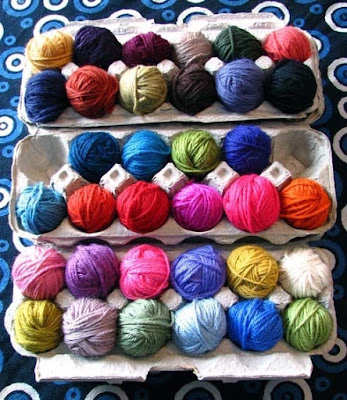 source Isn't this a clever way to store small balls of scrap yarn? If holes were poked in the top of the carton, the yarn could be threaded through, and knitting with the small balls would be easy.
12 comments
Read more 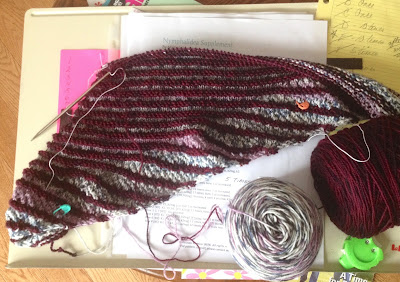 Brenda purchased yarn in Las Vegas for two Nymphalidea shawls, so I began the second shawl as soon as I finished the first one .  I was a little put off by the variegated yarn when I started, but since its a self-striping yarn, I decided to let it do its thing before asking Brenda if she wanted me to continue. When the other colors appeared, I was pleased with the look and continued knitting. Yarn:  Heritage Prints (Cascade Yarns) color #5 - (75% superwash merino, 25% nylon) Baah! LaJolla - Garnet (100% superwash merino) I pinned the shawl on the wall to show its true shape.  I like knitting the pattern so much that I've selected some yarn from my stash to knit one for myself.
12 comments
Read more
More posts