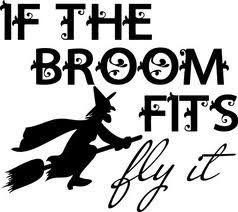 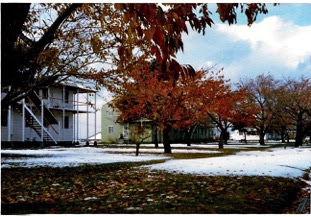 contrast of seasons in front of BOQs Misawa AFB, Misawa, Japan Autumn 1980 Adapting to life in Misawa was easier because the change of seasons were much like that at home: snow frequently falls in Wyoming when the leaves are still on the trees.
6 comments
Read more 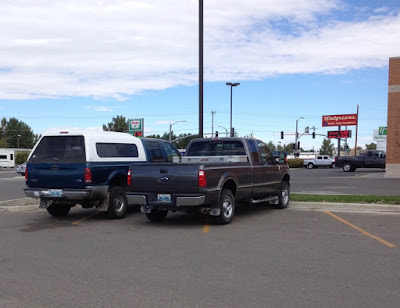 Trailhead parking lot Riverton, WY September 2015 It seems to be increasingly difficult for drivers in my area to park their vehicles according to the "suggested" spaces. I shake my head in disbelief when I see scenes like the one in the photo; however, I know full well the frustration of dealing with the "parking-challenged" drivers. Do you remember my post about the driver that parked so close that I could not get into my car on the driver's side and could not safely maneuver my car out of the parking space? My experience with challenged drivers Another shopper's experienced with challenged drivers Since my experience, I am cautious of where and how I park because clearly there are drivers who are "parking challenged."
9 comments
Read more 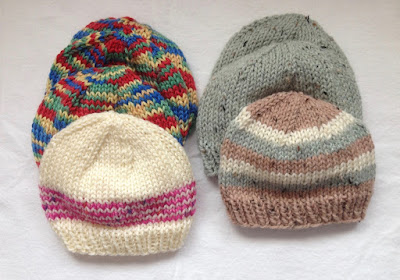 seven baby hats October 2015 I used the last bits of Julie's scraps to knit seven more baby hats, so the total is now 17 hats to be donated to the Public Health for the nurses to give to newborns in their care. As I mentioned in this earlier post , I used the off-white yarn to stretch the scraps. Thank you, Julie for sharing your scraps with me.
8 comments
Read more

Before They Disappear - Pay Phone 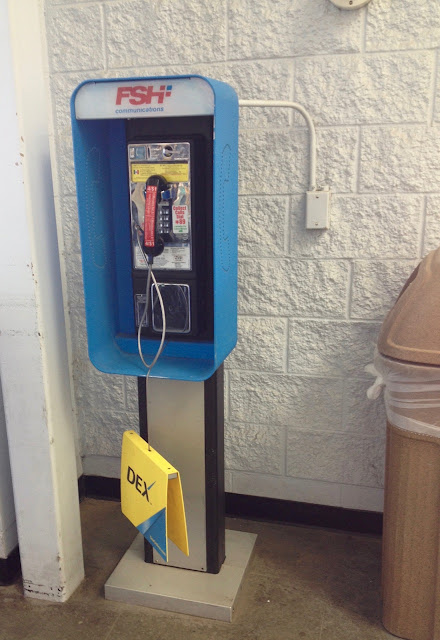 Pay Phone Walmart foyer Riverton, WY October 2015 A couple of weeks ago, I gathered all the loose plastic, shopping bags around my house and took them to Walmart's recycle bin. When I entered the store foyer, I spotted a payphone. Pay phone sightings are becoming more and more rare, so when I see one, I take a photo. . .before they disappear completely in this age of cell phones. Two years ago, I challenged my readers to look around their community for pay phones, and Tracy has been on the lookout. She recently spotted two phones in one day . Tracy sent me some links on pay phones - it's fun to see just how many phones used to be in our communities and have gradually disappeared. Pay phone directory The Pay phone project Posts of earlier sightings in my community and beyond: Lander, WY Douglas, WY Canadian park (Guest post) Have you spotted any pay phones in your community? If you have, go take a photo before they disappear.
10 comments
Read more 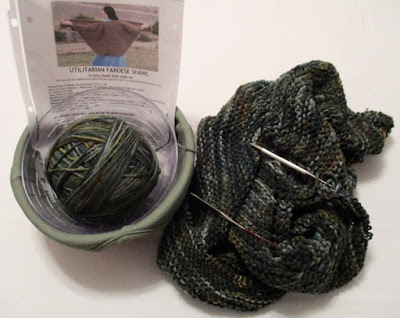 Utilitarian Faroese Shawl in progress October 2015 Three years ago, I purchased three HUGE skeins from this vendor  at the Knit and Crochet Show in Reno, NV. I knit a caplet and an eternity scarf from one of the skeins, but the other two have been waiting, not so patiently, in my sewing room for the perfect project to reveal itself. Just for the record, these skeins contain over 800 yards of superwash wool, and there are no breaks in the yarn. Winding the wool into balls on my small ball winder is out of the question, so I had to wind the yarn by hand. At times the ball was too large to handle comfortably, but I persisted. Presently, the shawl measures 14 inches at center back. The pattern recommends knitting 26 inches, so I'll keep knitting. measurement of yarn ball after knitting 14 inches, which is over half of the length required.  There is no doubt that I will have enough yarn for this project, as the photo is a bit deceiving. Here the circumference of the
8 comments
Read more 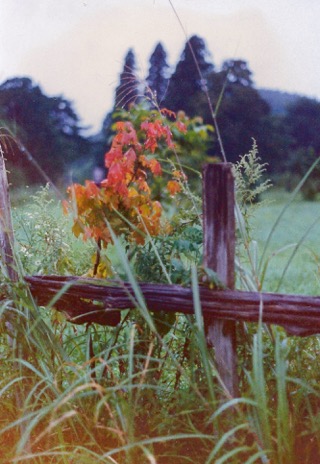 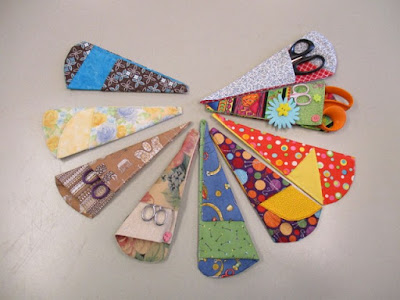 Scissor cases on display October 2015 Last week, the sewing group that meets at the Lander Library made cases for storing scissors. The cases are made from two 8.5 x 11 inch pieces of coordinating fabric and a piece of fusible interfacing. Each case holds three pair of scissors, two on one side and one on the other. It was a fairly quick and fun project. My case is the fourth from the right, the purple fabric with yarn balls. I didn't follow the directions very well, so mine has a curved pocket on the inside. The tutorial for the cases can be found here .
8 comments
Read more 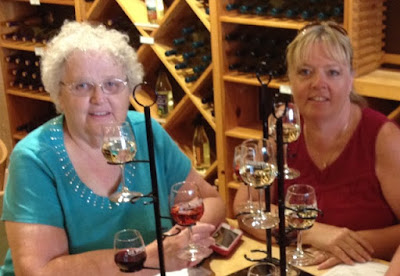 Marilyn & Brenda Oz Winery Wamego, KS August 2015 The Oz Winery is just down the street from the Oz Museum and was a welcome respite from the heat. wine list We purchased a flight of three wines that we wanted to try from their selection, and then selected some bottles of our favorites to be delivered when we arrived home. Since we still had several days of travel and did not want to expose the wine to the intense heat inside and outside the vehicle, we opted to have the wine delivered. The wines have clever names like "Curl Your Stockings," "Surrender Dorothy," "Yellow Brix," "Drunken Munchkin," and my favorite - "Squished Witch." I ordered two bottles of "Squished Witch," two of "Witch Gone Good," and one of "Auntie Em's Prairie Rose." As I drink this wine, I will be reminded of the fun that we had sampling and of all the adventures of our trip.
9 comments
Read more 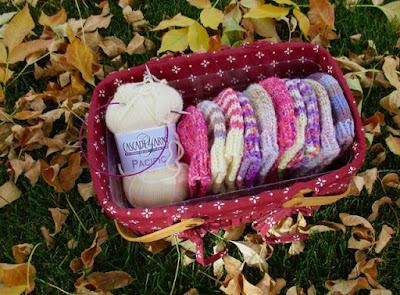 ten baby hats knit from scraps October 2015 Julie, a knitting buddy, gave me some Encore she had left over from knitting baby sweaters. I used the scraps to knit baby hats. Every bit of the purple and pink yarn was used by alternating with the off-white Pacific yarn, which was purchased at a thrift shop in August. It worked great for stretching the scraps to knit more hats. Since the Encore and Pacific are considered worsted weight yarn, I had to change my usual pattern at bit. Needle size - US 8 Pattern:  cast on 54 sts, knit a 1x1 rib for an inch or an 1.5 inches for the brim, stockinette stitch for the body of the hat until it measures 3.5 inches from the cast on edge, begin decreases (k6, k2 tog for the first row, k all stitches on the second row, k5, k2 tog for the third row, k all stitches on the fourth row) continue in this manner through k1, k2 tog and then the final row is k2 tog, cut the yarn and thread the end through the remaining stitches. Pull yarn to the un
15 comments
Read more 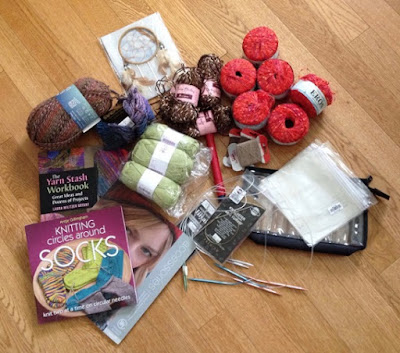 contents of the Take & Replace Swap box October 2015 Last week the Take & Replace Swap box found its way back to me, so the swap is officially completed. The box travelled from coast to coast and a lot of places in between. It started in Wyoming went east to Illinois, then further east to New Jersey, sent back west to Wisconsin, on to South Dakota, back to Wyoming, headed south to Colorado, journeyed further west to California, and returned home to Wyoming. The swap covered seven states and a little over 5,000 miles less than a month. Thanks to the following participants for keeping the box moving and for placing some great items inside the box. Kathyb  (Illinois)  Grace  (New Jersey) Judy  (Wisconsin) Sylvia – no blog (South Dakota) Kay – no blog (Wyoming) Paula  (Colorado) Ellen  (California) I hope everyone had a good time switching up their stash.
12 comments
Read more 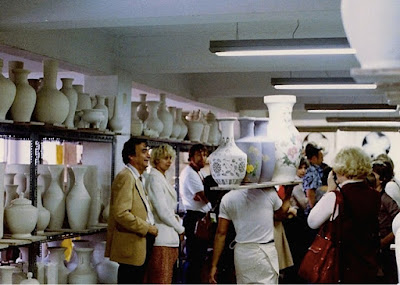 Chinese Pottery Factory Taipei, Taiwan December 1979 I can't begin to imagine the confidence and balance that it took to carry those huge pots on a slim board while maneuvering through a group of gawking tourists. Doesn't it make you wonder how many were broken before he mastered the technique. Other posts about the Pottery Factory can be seen here .
5 comments
Read more 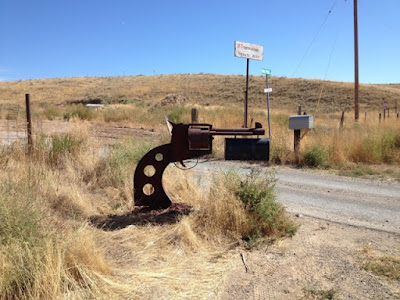 east of Thermopiles, WY September 2015 My sister and brother-in-law visited recently, and we drove to Thermopolis to meet their son and daughter-in-law for dinner. We arrived early, and after checking some stores downtown, we went for a short drive east of the State Park. This unique mailbox was spotted at a fork in the road. Rusted, old vehicles used as riprap in a ravine Thermopolis, WY Riprap is usually not so noticeable, but this site was obviously quite old and was, in a strange way, almost beautiful.
10 comments
Read more 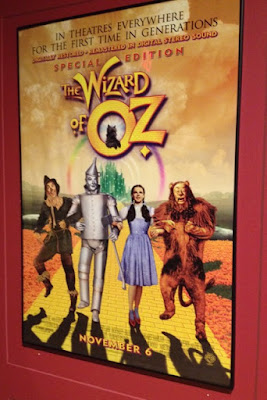 new movie poster Oz Museum, Wamego, KS August 2015 Remember when the Wizard of Oz was aired on television every March? I can't begin to count the number of times that I rushed through my chores and into the house so I could watch it. I had no idea that over half of the movie was in color because we didn't have a color television until the early to mid-1960s. Scarecrow Visiting the Oz Museum in Wamego, KS was a real treat. It is a small building and packed with memorabilia from around the world. Most of the main characters were on display in separate areas: Tinman Cowardly Lion replica of Dorothy's ruby slippers The Dorothy and Toto display looked a bit forlorn, so I'll show you the replica Ruby Slippers that were on display. It was fun to visit this museum and to relive some childhood memories. Do you have memories of watching The Wizard of Oz ?
9 comments
Read more 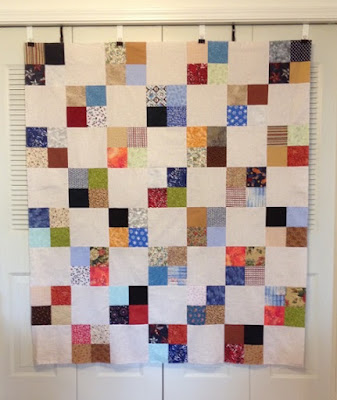 Simplicity 56 x 66 inches Quilt of Valor Simplicity's four-patches were made with 4.5 inch scraps from other Quilts of Valor. This is Quilt of Valor #76 - a complete list can be seen here .
8 comments
Read more

Back in Time - Initiation 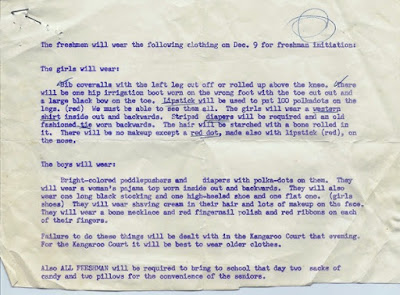 (click to enlarge) Freshman Initiation Dress Requirements Pavillion High School Pavillion, WY Fall 1965 Freshman Initiation was a common activity in the 1960s, and in the Fall of 1965, I was a lowly freshman. The senior class was composed of nearly all boys (if I remember, there was one or two girls in the class). (click to enlarge) Initiations were usually held in the Fall during Homecoming Week, so I don't know why the informational sheet had a December date on it. As shown above, I crossed out the December date and wrote in October 25. Here's the crazy speech we had to memorize and recite whenever we encountered a senior:     Almight and glorious seniors of ’66 we the lowest scum that have ever walked the face of the earth fall prostrate at they feet and beg for they gracious, glorified, and wise indulgence.     We comprehend that we, who are so wanton, grotesque, insulate, and lugubrious in our unscrupulous and invalid acts, are unwarrantable of they great an
9 comments
Read more 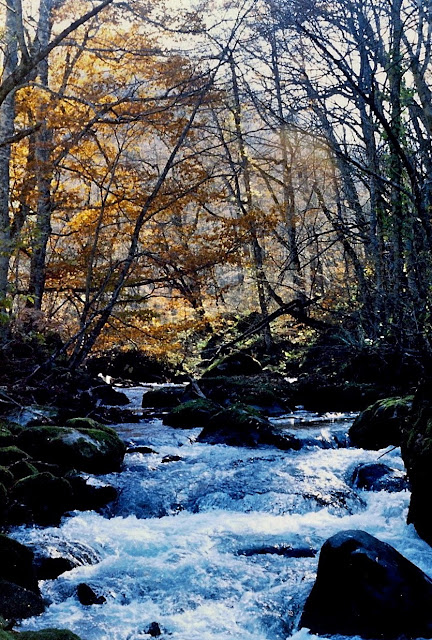 along hiking trail to Lake Towada Northern Japan Autumn 1979 The trails to Lake Towada were gorgeous when the trees were showing some color. Some previous posts about this area can be seen here .
9 comments
Read more 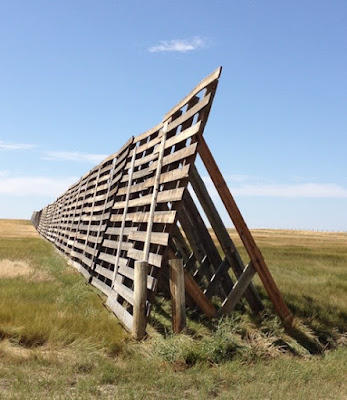 Windward side of wood snow fence near Casper, WY September 2015 It's no secret that the wind blows and even howls sometimes in Wyoming, especially in the Winter. When there is snow on the ground (even minute bits) it blows and drifts across roads, causing hazardous driving conditions. wooden snow fence near Casper, WY September 2015 In an attempt to control the drifting snow, the highway department places snow fences in those areas. Sometimes the fences run for miles and in other places they can be parallel to each other. The snow passes through the fence and forms a huge drift on the leeward side of the fence. Aluminum snow fence on South Pass note the rows of fencing in this high wind area September 2015 In the past, most snow fences were made of wood, but now, many are aluminum. One area of South Pass has a unique rock snow fence. I can't imagine the effort that it took to build that fence. Along Interstate 25 in southeast Wyoming north of Chugwa
8 comments
Read more
More posts