Showing posts from April, 2013
Show all

Back in Time - The Cousins

By Nancy - April 30, 2013
First cousins Barbara, Evelyn Charlotte, Marilyn, Rich, Nancy November 1955 It is hard to determine when the photo was taken because the date only indicates when the film was processed and the photo printed. Sometimes photos were taken and the film thrown on the top of the refrigerator to be processed later. The jalopy in the photo was my brother's and clearly a work in progress -- note the steaming radiator. My brothers loved to tinker with old cars and machinery. Rich had a Model A convertible with a rumble seat that he hoped to restore but never did.
10 comments
Read more 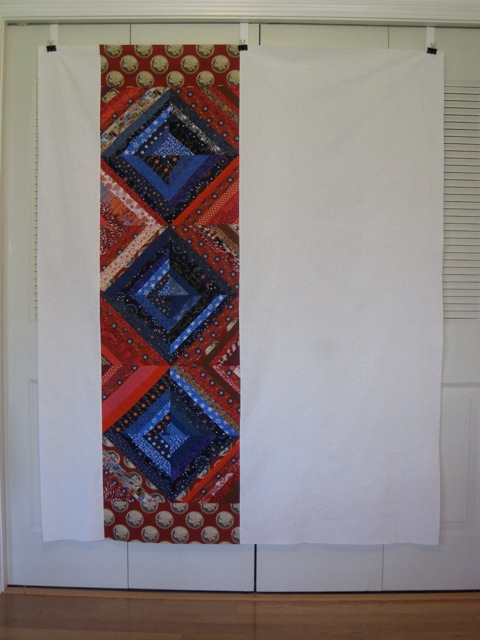 Blue Diamonds Quilt of Valor 55 x 68 Blue Diamonds  is loosely based on " Tie the Knot " featured in November/December Fons and Porter's  Love of Quilting magazine. Tie the Knot uses neckties to make the string blocks; however, I used cotton scraps. My string blocks are also larger. Blue Diamonds ' string blocks were a great way for me to use odd bits of fabric - strings of various widths and lengths, remaining from the Quilts of Valor made for the 2012 Challenge. Update : The strings were sewn on pages from an old phonebook and then squared to 10 inches. The blocks are 9.5 inches, finished.
9 comments
Read more 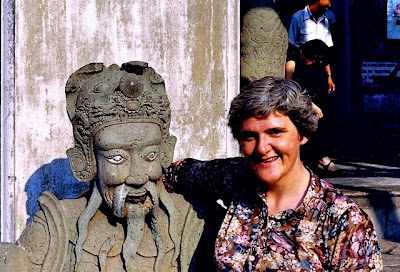 Nancy outside a temple Bangkok, Thailand December 1979 My hair was certainly darker in this photo -  true "salt and pepper"  - than it is now.  My hair today has more salt than pepper, as it is practically white.
8 comments
Read more

Bearded Iris in a Mason Jar 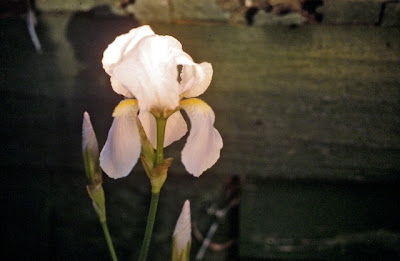 Bearded Iris I've always loved bearded iris probably because my mother had so many of them in a variety of colors. In the two corners of the yard next to the irrigation ditch were clusters of iris. The one near the orchard were a deep purple and always had huge blooms. That flower bed also contained orange day lilies. Behind the house was a long row of yellow iris (see photo below). The garden also had long rows of iris - yellow, purple, pale blue, and some with multi-colored blooms. Rover and Nancy taken behind the farm house approximately 1955 When the iris were blooming, a mason jar filled with iris blooms was frequently on the kitchen table. What flower(s) do you remember from your childhood?
12 comments
Read more 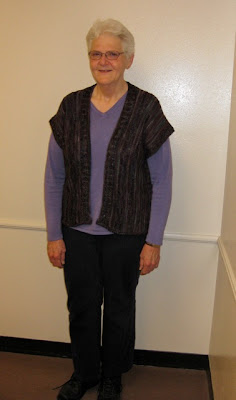 Spring Violets Vest April 16, 2013 Oops, I didn't check to see if the vest was situated correctly before having a friend snap the photo. The vest looks good with denim and slacks and could even be worn with a skirt or dress. I love it! The vest drapes really well. I know that I am going to enjoy wearing it.
12 comments
Read more 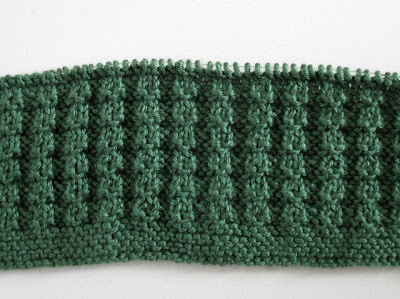 Sunflower Western Region Oddball Baby Blanket started April 2013 Thank you for all the great name suggestions for the new Oddball blanket. I'm going to keep them on file and will use them as empty needles are available. It has been snowing steadily here for the last week, so I decided to knit start a the blanket with a hope of warmer days. Thank you, Connie (FarSide) for the name suggestion. Yarn: Simply Soft (Deep Sage) Size 8 needles - 126 stitches Stitch - Checks and Ridges Update: September 9, 2013
11 comments
Read more

Springtime in the Rockies 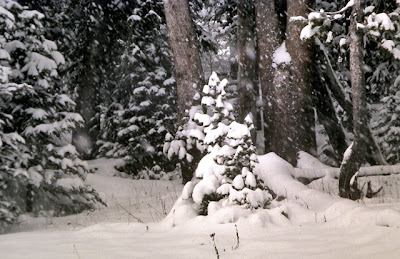 Togwotee Pass Continental Divide May 1979  Even though these photos are old, they capture a typical spring day in Wyoming. The weather can range from snow flurries placing a new blanket over the terrain to delicate new leaves unfurling on the aspen trees. These photos in this post were taken on the same day - one on the pass and one in the valley. Photos of Togwotee Pass in 2011 can be seen here  and here . Old cabin near Jackson, WY May 1979 Here's the weather report this morning: source I hope the "moderate snow" stays in the mountains, and that the valley will receive a more liquid form of moisture. Welcome to Springtime in the Rockies! If you would like to hear the Sons of the Pioneers (anyone remember them?) sing the ballad When It's Springtime in the Rockies , click here .
12 comments
Read more 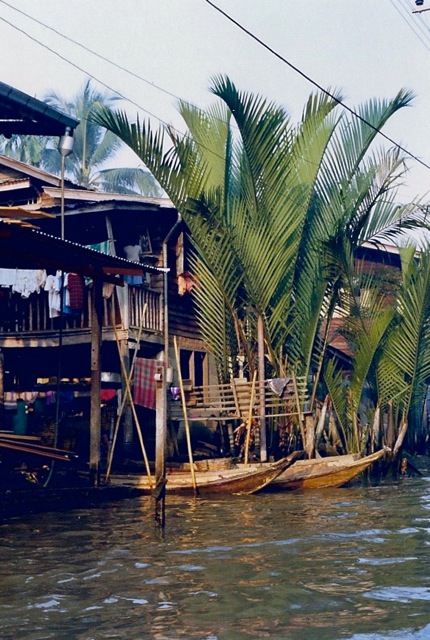 By far the best thing I ever learned in high school was how to type. Without that skill, I would not have been able to prepare the many term papers (research papers) that were required in high school and in college. I would not have been able to prepare the hundreds of worksheets, outlines, mimeograph stencils (does anyone else remember those?), applications, quizzes, tests, and reports that my job required. Little did I know that when I was typing the sentence, " the quick, brown fox jumps over the lazy dog " that I was using all the letters in the English alphabet. Mrs. Glaser was my typing teacher, and the typewriters in her classroom were manual like the Remington in the photo above. The keys on every machine in the room were capped so the letters were not visible. The only way to type was memorize the placement of letters and to drill, drill, drill - every day. The only help was high above the blackboard where a chart with the keyboard placement was displayed.
12 comments
Read more 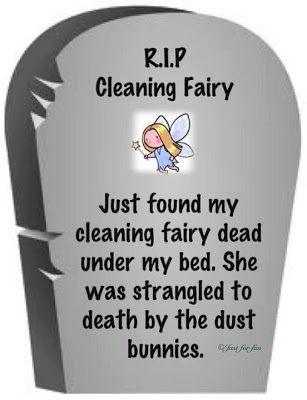 Even though Winter is still trying to hang on here in Wyoming, I know that Spring is arriving in other parts of the country. I'm curious how many of you do a deep cleaning (Spring Cleaning) of your house? You know the kind where you move the furniture, vacuum the blinds or drapes, wash the curtains, wipe down the mop boards, wash the windows (inside and out), dust the top of the door frames - a real white-glove test cleaning. Is "Spring Cleaning" a mythical legend or a genuine phenomenon?
13 comments
Read more 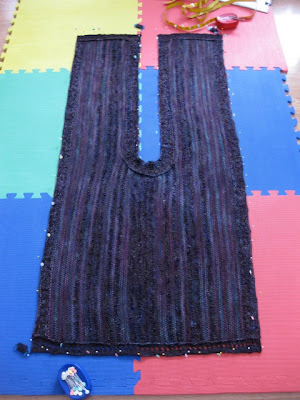 Spring Violets vest started January 16, 2013  Spring Violets is truly off the needles. The picot edging needs tacked, and the sides seamed before it can be considered completely finished. The colorful, foam mats were purchased at Kmart several years ago for the fraction of the price of those sold by Knit Picks and other online stores; plus, the mats are large, 24-inch squares compared to the 12-inch ones sold specifically for blocking.  I use my quilting pins to hold the project in place. A photo of the finished vest will be posted soon.
8 comments
Read more

Back in Time - Mrs. Jones 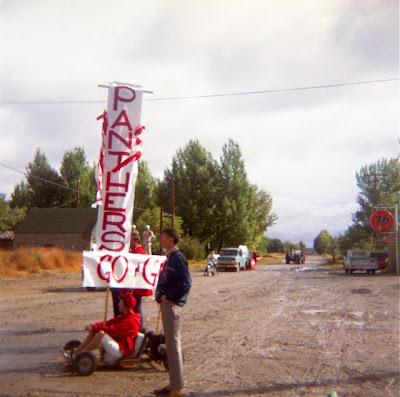 Lining up for the Homecoming parade Irene Jones on go-cart and Jerry Glasgow, standing Pavillion High School approximately 1968 Pavillion, WY I love this photo because it shows how much Pavillion has changed. The street is now paved (only Main Street was paved in the 60s), and the Union 76 station has long since closed. The nearest place to purchase gasoline today is nearly 10 miles down the road in Kinnear. After this photo was taken, the Union 76 station became a laundromat, a private home, and then later a Fifties Diner. I'm not sure what it is today. Behind the Panthers Go-Go sign you can see other parade entries - a flat bed with some individuals dressed as football players, a motor bike, and a pick-up pulling a flat bed trailer that was probably a class float, and a tractor that was either waiting for the parade to pass or was pulling another float. The Homecoming parades drew a crowd along Main Street, which is probably less than a quarter mile long. Another reas
13 comments
Read more 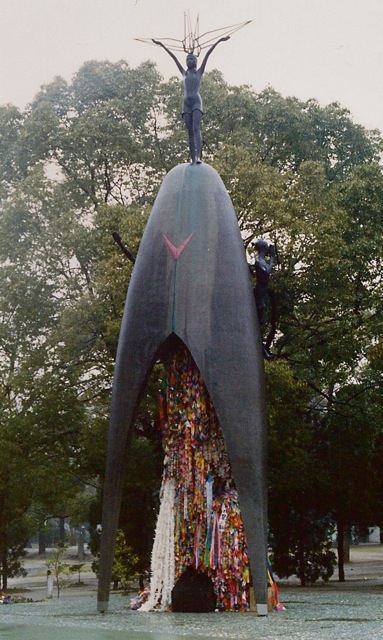 Thousands of Origami Crane Strings hang in the Hiroshima Peace Park Memorial April 1980 Please note the girl at the top of this memorial holds a large crane. That girl is the likeness of Sadako Sasaki . Wikipedia states, the thousand origami cranes were popularized through the story of Sadako Sasaki, a Japanese girl who was two years old when she was exposed to radiation from the atomic bombing of Hiroshima during World War II. Sasaki soon developed leukemia and, at age 12, inspired by the senbazuru legend, began making origami cranes with the goal of making one thousand.  In a popular version of the story as told in the book Sadako and the Thousand Paper Cranes, she folded only 644 before her death; in her honor, her classmates felt sorry and agreed to complete the rest for her.
8 comments
Read more 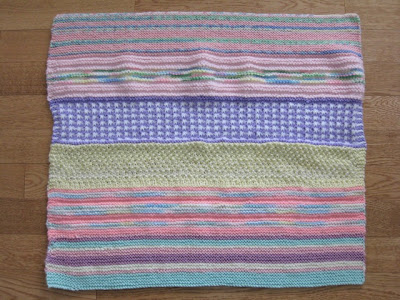 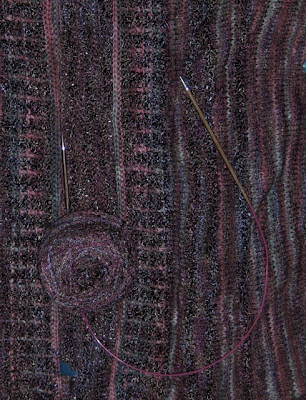 One more edge to knit before this project is officially off the needles and can be blocked. The bottom edges are knit with the soft twist rayon, shown above. After blocking the vest, I'll stitch the picot edging at the bottom and the side seams.
13 comments
Read more 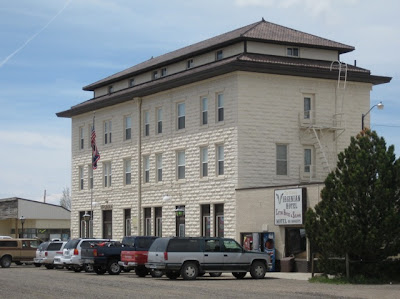 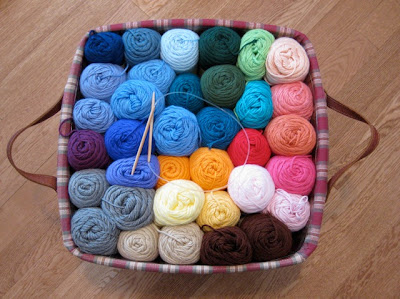 Since I was the last knitter on an Oddball blanket last week, it's time to chose a color and begin a new blanket. As you can tell, I am well stocked with Caron Simply Soft. Any suggestions on color and/or name for this new Oddball?
19 comments
Read more 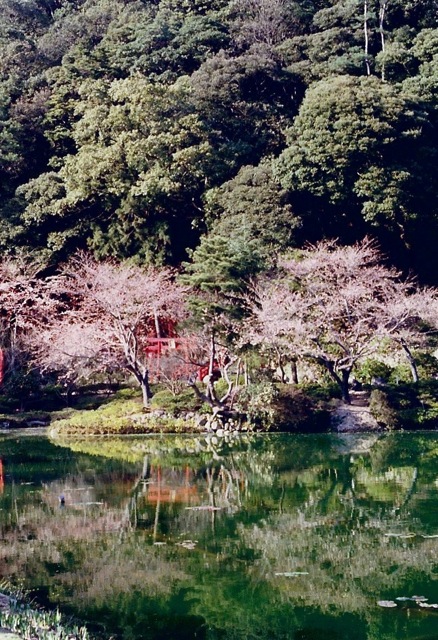 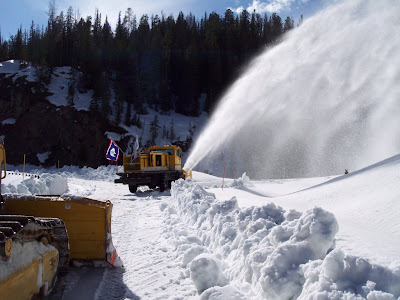 Photo from County 10 When the Congress decided to reduce spending and the  sequestration took effect, it put the National Park System (NPS) in a bind. Typically, Yellowstone National Park is open for visitors in May, but before the Park can be opened, the snow must be plowed from the roads. Because of the sequestration, the NPS did not have the funds to operate snow plows, so Wyoming's Governor, Matt Mead offered State snowplows and the personnel , if the communities surrounding the Park could collect enough money to run them. Toursits are the lifeblood for these communities, so merchants and private individuals went into a fund-raising mode and raised the required money. According to County 10 , it costs up to $30,000 a day to plow the roads in the Park. The roads are being plowed, the Park will open on time, the tourists will come, and the communities will thrive - all this because people chipped in and helped in various ways. Wyomingites didn't sit around and com
7 comments
Read more 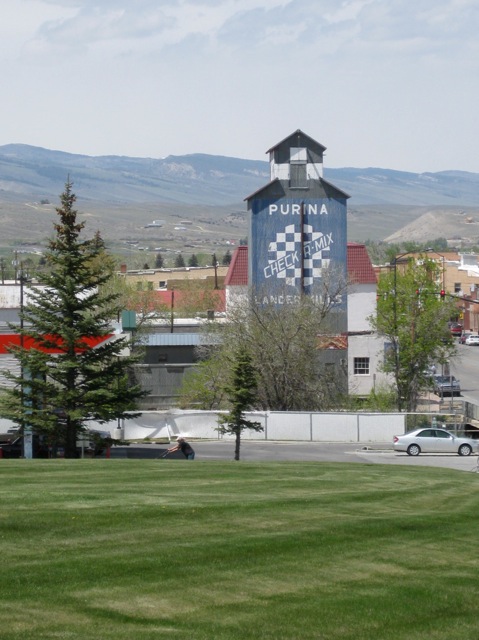 Lander Mills (looking west) Lander, WY Late Spring 2012 I decided to photograph these buildings last year because so many of the older grain elevators are being torn down. Riverton used to have three large elevators, but only small outer buildings remain. The Lander Mills complex is still standing and is being used as a feed store.  Lander Mills (looking northwest) All of the elevators were located next to the railroad tracks, but the tracks were pulled up years ago. This gentle giant remains in Lander as a reminder of earlier days. Lander Mills the present owner had a bicycle mounted on the roof after this photo was taken
13 comments
Read more
More posts