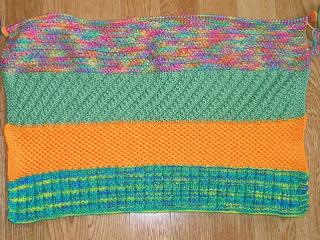 "Summer Fun" is the first of four Oddball Baby Blankets that I will receive this week. I haven't worked on so many in such a short time-frame before, but it is still manageable, as I can usually get my required section finished in an evening of knitting.

For Summer Fun, I chose a Red Heart yarn, color Pinata. I thought this multi-colored yarn, coordinated with the other colors. I used the Grill Stitch, but the variegated yarn tends to disguise and distort the stitch.

Many different knitting stitches can be found here.

One blanket down and three more to complete: Firetruck Lane, Easter Basket, and Just Ducky will soon be appearing in my mail box. I am ready for the Oddball Knitting Rush. 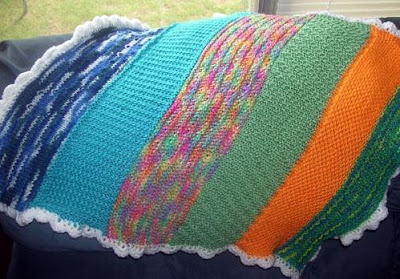 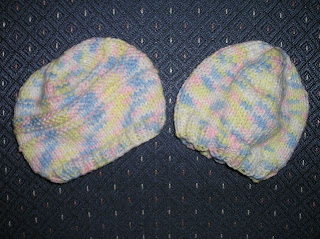 After I posted an entry about the need of baby hats at my local hospital, an online friend offered to help. Her donation from California arrived in today's mail.

Patt went one step further and issued a challenge to others in her online knitting group: Kathy and Lily pledged to also make hats. 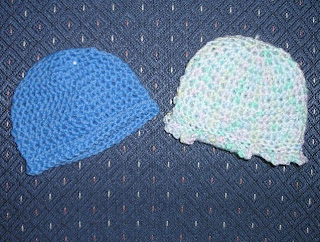 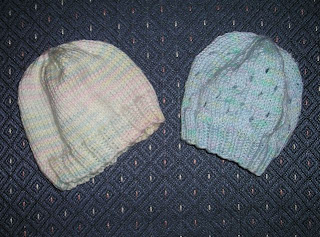 
The babies at the hospital will be touched with the loving stitches from the Atlantic to the Pacific Oceans.
Posted by Nancy at 4:37 PM 1 comment:

"Flower Garden" has been to my house twice: first in March and now again a month later. It has grown considerably and is far prettier in person than in the photos.

Flower Garden is a product of the charity knitters at KnittingHelp.com. Sandy, a maven or organization, prepares spreadsheets to keep track to the many oddball projects. Right now, there are more than 75 blanket projects in progress. I consider myself an organized person, but she is light-years ahead of me. Sandy coordinates the knitters on the projects, supplies the addresses when the knitters are ready to forward the project, and adds the finishing touches of fringe or edging. She is awesome, and the forum is blessed to have her as the moderator and coordinator. 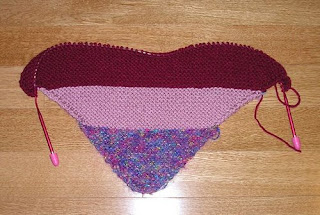 This is what Flower Garden looked like when I first received it in March. 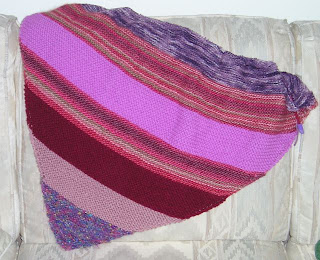 One month later, its appearance has changed completely.

It is like finding that your child has grown into a teenager overnight. 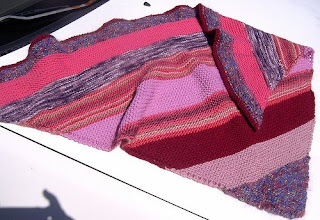 "Flower Garden" is finished and ready to be given to a KnittingHelp.com forum member who is experiencing a difficult situation.
Posted by Nancy at 2:23 PM 2 comments:

A Blanket is Born 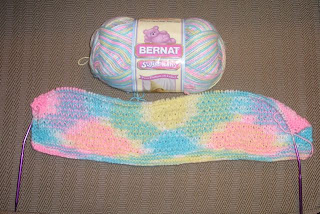 I had the privilege of casting on and knitting on a new Oddball Preemie Blanket. "Summer Blossoms" began with Bernat Baby Softee (Tutti Frutti) on size 6 circular needles.

I cast on 100 stitches and knit the required garter stitch border. Then I knit a pattern, new to me. Sorry, I don't even know the name of the pattern.

I repeated this pattern until the blanket measured four inches. Now, "Summer Blossoms" is ready for the next knitter.

Where will it go?


Update: August 2008
Summer Blossoms is close to being completed. It still needs another section and an edging. 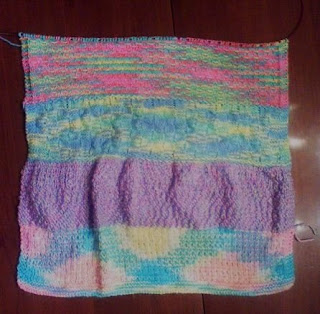 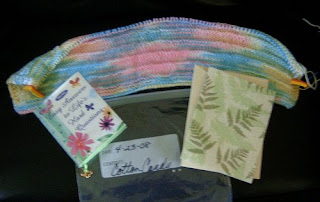 I had yarn left from the skein Sandy sent to me, so I used the rest to start another blanket for the group. 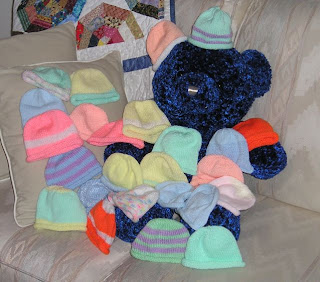 The focus of my knitting has been on babies. I completed 25 hats for the local hospital nursery, laundered them, and have the packet ready to deliver.

Some of these hats were made from the yarn that mysteriously appeared by my door recently. It is amazing just how little yarn it takes to make one of these little hats.

I belong to an online knitting group and when I posted about my project, the leader (Pat) promised to make two, newborn hats, and she challenged the other members to join her. I am touched by their interest and participation. 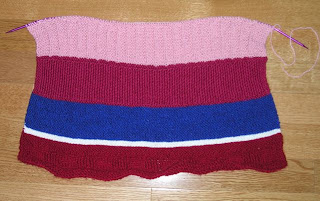 "Berry Bliss" arrived in my mailbox from Virginia. I added the pale mauve section and have prepared the blanket for its trip back to the east coast. This time it will go to New York. These Oddball blankets travel thousands of miles before they are finished and delivered to hospitals in Missouri or North Carolina.

I am pleased that I can touch so many young lives with my knitting skills. The knitters that I have met through these projects are talented, loving people. I have been richly blessed in more ways than I can count.
Posted by Nancy at 11:25 PM 3 comments:

I found this test on another blog this morning and thought, "A few questions cannot possibly identify a personality type." Boy, was I wrong. The questions seemed innocent enough, but the result is truly amazing. This is who I am: 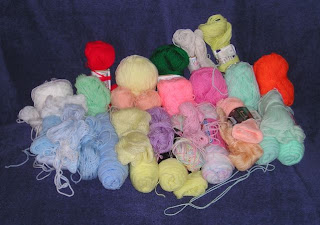 I was the recipient of a Random Act of Kindness this morning. My benefactor left a bag of assorted baby yarn in the box by my front door.

The donation could not have come at a better time since I have been knitting hats for the local hospital nursery and my stash of baby yarn was dwindling. I am continually reminded that the Lord provides for our needs no matter how small or seemingly insignificant.

If the donor rang the doorbell, I did not hear it because I was cleaning, and my vacuum overwhelms other sounds like the doorbell and the telephone. I wish I knew who left the bag because I would like thank her/him for helping provide a bit of love to the babies born in our community.
Posted by Nancy at 3:18 PM 1 comment:

When Old is New 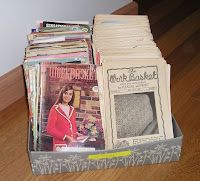 Yesterday, I spotted this box of Workbasket Magazines at a neighborhood yard sale. I leafed through the issues and pulled out five that I thought had some good patterns.

When I got home with my purchases, I scanned the pages with interest. The old issues contained patterns and styles that were both dated and dateless. The classic designs can be seen in current knitting magazines, and the dated styles were funky and comical.

By chance, I went back to the yard sale, left my phone number and told them that I would purchase whatever they had left at the end of their sale. Today, they called, and to my surprise, they would not accept payment for the issues. I cannot wait to look at the volumes that date back to the late 1940s. Surely, some of the old patterns are currently stylish and what is old can be considered new.
Posted by Nancy at 5:07 PM 1 comment: 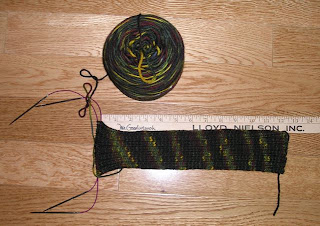 I can attest that Clare knew what she was talking about. When I offered to help a young gal in my knitting group knit a pair of socks for her husband, I thought it would be a quick process. I've make numerous socks, and she just finished her first pair after working for a year. She wanted to knit socks for an anniversary gift for her husband. She is a relatively new knitter, and since she had difficulty turning the heel on her socks, I offered to knit the cuff, heel flap, and heel turn, and let her do the gusset, foot, and toe.

Her husband knows that she is going to make the socks, so she asked him how long he wanted the cuff. He measured his favorite pair of socks and announced 14 inches. When she called and told me the measurement, I nearly gasped. Ribbing is not exactly my favorite activity, but I had promised to help, so I began knitting.


This has turned into a marathon project, but the end is in sight. Yep, Clare was a wise, wise woman. 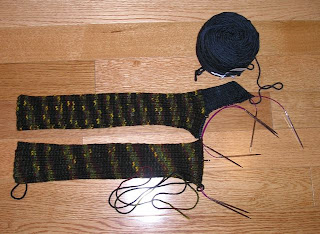 The cuffs are finished and one has a heel flap, heel turn, and gusset started. It is now ready for my friend to knit the foot and the toe. Hopefully, she will be able to finish both socks by her June anniversary.

I was disappointed that the yarn striped differently on the second cuff, but it could not be helped.
Posted by Nancy at 4:40 PM 1 comment: